Scientific and technological advance: globalization and impact of national policies

Reciprocity of science and technology

The scientific and technological progress is often named as a key mover of mankind’s development. While technology advance is clearly evidenced in everyday life, scientific research is what actually stands behind it.  Scientific literature offers wide variety of concepts and definitions of “technology” term. According to Bozeman (2000), technology may be defined as (1) the science or study of the practical industrial arts; (2) the terms used in a science, technical terminology; (3) the applied science. Technology Education Federation of Australia (1999) quotes UNESCO, the United Nations Education, Social and Cultural Organisation, which defines technology as: “…the know-how and creative processes that may assist people to utilise tools, resources and systems to solve problems and to enhance control over the natural and made environment in an endeavour to improve the human condition”. Vengrauskas and Perminienė (2002) maintain that technology means appliance of raw materials and processes for development of a certain product. According to National Academy of Engineering (2008), technology is the process by which humans modify nature to meet their needs and wants. Referring to this source, as technology includes the entire infrastructure necessary for the design, manufacture, operation, and repair of technological artefacts (such as engineering know-how, manufacturing expertise, and various technical skills), it may be considered as a product of engineering and science. Moreover, the knowledge and processes used to create and to operate these technological artefacts are equally important part of technology. Reciprocity of the science and technology are also field of concern of many scholars. For instance, according to Meyer (2000), basic research, or science, produces a number of scientific research papers, while technology is materialized mostly through patents. This author offers two approaches for analysing connections between science and technology: (a) the linear interpretation and (b) the two-way interpretation. Figure 1 clearly illustrates the differences between these two approaches. Copyright symbols © in this scheme indicate basic research, and symbol for registered trade-marks ® here symbolises patented technology. 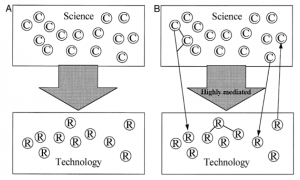 As depicted in Figure 1, linear interpretation represents that the increasing number of scientific research papers cited in patents documents strengthens connection “between the areas of science on the one hand, and technology on the other”. Meanwhile the two-way interpretation contrasts this simplified interpretation by a more complex view of the relationship between scientific papers and patents (Meyer, 2000). As overview of scholar literature shows, the two concepts of science and technology cannot be distinguished easily, as they are tightly interrelated. Therefore, further in this paper these two terms are used jointly in order to receive the full picture.

In the end of the last century, processes of globalization were influenced by several interrelated factors: advanced information and communication technologies, lower transportation costs, corporate strategies oriented towards customer needs, exploitation of technological and organizational advantages, trade liberalization and financial flows, etc. As a result, structure of international business has developed intensely during the last decades.  Deroukakis (2000) emphasises that over the past twenty years the world has experienced a fundamental transformation in the nature of the international economy. As one of the most important factors of changes in dynamics of global competition, this author mentions rapid implementation of new technology. Fink et al. (2002) also highlight that discussions of the causes of growth in world trade in the last quarter of the 20th century frequently cite technological progress in telecommunications and associated declines in communication costs as an important contributor. These authors refer to Krugman and Venables, who argued that the emergence of international production networks has been driven by improved communication links that facilitated the coordination of geographically dispersed production processes. In the light of these changes, globalisation of technology may be analysed one of the most important factors. Archibugi and Pietrobelli (2003) offer taxonomy of the globalisation of technology, which is a useful tool for analysing role and forms of performance of various private and public bodies in international exploitation of nationally produced technology, the global generation of innovation and global technological collaborations (see Table 1).

Continue of the Table 1:

Table 1. Taxonomy of the globalisation of technology (Archibugi and Pietrobelli, 2003)

Meanwhile, Alborovienė (2002) defines five trends of scientific and technological advance that prevail in developed countries in the context of globalization (see Table 2).

Table 2. Trends of scientific and technological advance (according to Alborovienė, 2002)

Reflections on these five trends can be found in other scholars’ works as well. Below, overview of literature regarding to the most important trends is provided. While speaking of rapidity of technological advance, Binswanger (2001) stresses that one of the most important aspects of technological progress is the increased efficiency of both: working time and consumption time. According to Deroukakis (2000), rapid implementation of new technology – i.e. advance in communications and transportation technology – has erased borders and shrunk distances, thus leading to fundamental changes in business organization and techniques. Binswanger (2001) agrees with Deroukakis (2000) and maintains that technologies stand for mobility. He also states that there is a time-saving innovation in transportation technology. Deroukakis (2000) places more highlight on business and maintains that revolutionary changes in the organization and technology of production (including faster product cycles) are further hastening the transformation of domestic economies. Fink et al. (2002) cite Spinanger, who reports evidence from a survey of 14 major textiles and clothing producers in Hongkong (with activities throughout Asia and around the world), which identifies the quality of Telecom infrastructure as a key factor in decisions on export-oriented foreign direct investment-more important than policies affecting trade and investment, labour costs, and education and training of workers.  Unlimited potential of innovations is especially emphasised by Alborovienė (2002), who maintains that progress of science and technology makes substantial impact on company’s product creation, its development, and manufacturing since each scientific achievement may result in new products and creation of new needs. This author highlights that emergence of new technologies is often related to downfall of the old ones, which frequently creates threat not only to a certain product, but to its producers and even entire industries as well.  As regards the last trend – increasing governmental regulation of technical advance – Sanz-Menéndez and Cruz-Castro (2005) offers exhaustive analysis of importance of regional government (in contrast to national one) in drawing and implementing science, technology and innovation policies. Binswanger (2001) also stresses importance of science and technology in ensuring sustainable development. According to this author, technology is supposed to help people in promoting a society where it is possible to keep our present standard of life or even increase it while at the same time using less resources and especially less energy.  Under the influence of the above-mentioned trends, the IEBM Handbook of International Business (1999) forecasts that in the future economic relations will develop between the trading blocks rather than separate countries. In this environment, bilateral and trilateral transactions, business companies will join into strategic alliances, which will help them to integrate into global economy.  Thus international business has strong links with scientific and technological advance. Scientific technological progress is related not only with creation, development and manufacturing of products, but also with improved business management systems, supply chain, logistics and international payments.  Basing on Delphi study conducted with a set of experts drawn from the policy, business and academic communities, Czinkota and Ronkainen (2005) forecast changes in the international business environment over the next decade and the impact of these changes on policy and on corporate practices. These authors predict that consumers increasingly will ignore superior technology for the sake of technological compatibility and comfort. It will therefore be imperative to offer innovation with an “irresistible functionality”. Major emphasis, these authors forecast, will fall on “a move from what is technically possible to what is highly desired by consumers”. They also predict new market opportunities for environment-friendlier technologies.  Among other changes, Czinkota and Ronkainen (2005) foresee that in the nearest decade, governments will directly support the emergence of new technology with measures such as tax incentives and fuel standards. The increasing influence of governmental policies on the development of science and technologies is highlighted by many authors as they consider that successful development of country’s scientific and technological environment requires effective national science and technology policy. Below, impact of governmental policies on scientific and technological advance is analysed with more detail.

According to Feeley (2002), the underlying governmental policy goals associated with science and technology policy include military, commercial, and environmental goals and the advancement of knowledge, among others. Lemola (2002) maintains that science and technology policy “is determined by the idea of a deliberate integration of scientific and technological activities into the fabric of political, economic, military and social decisions”.  Stubbs (2007) proposes that technology policy seeks to create productive capability, which often requires public sponsorship. Therefore, according to Scherer and Harhoff (2003), science and technology policy can defend creation of new technology from market failure. According to Nayyar (2002), forces regulating technology and investment flows “support greater economic integration driven by free market forces and provide level playing fields for all participants regardless of their size and competitive abilities”. Stubbs (2007) maintains that governments, being able to consider longer-term benefits from the social rather than private point of view, can pool the risks. He stresses that the funding of much basic research in most countries is a government responsibility.  As Stiglitz (2003) put it, one of government’s oughts should be to support a broad intellectual infrastructure. This author highlights that education, especially advanced education and research institutions have the key role in this task. As Feeley (2002) describes, universities and national laboratories are the recipients of governing funding and act as main incubators of scientific ideas from the drawing board through development. Meanwhile, business concerns have also important stakes in science and technology policy, as government contracts for their services are major source of corporate revenue and income. Stiglitz (2003) emphasises importance of close links between the research institutions and the education institutions and industry, i.e. to take the ideas being produced in the universities and translate them into products that have global market reach. Archibugi and Lundvall (2002) give example of reallocation of academically trained workers towards small- and medium-sized firms for formation of networks with universities and other knowledge institutions.  Apart from universities and corporations, Feeley (2002) describes other constituency groups that are involved in science and technology policy, namely advocacy groups, and the general public. They also play significant roles in decisions concerning science and technology policy. In different circumstances, as Feeley (2002) notes, these individual constituencies can be rallied to bolster the prospects for, or against, individual science and technology issues, policies, or programs.  According to Stiglitz (2003), government intervention is necessary for taking into account the full range of benefits that arise from research; it should focus explicitly on projects where it is hoped there are large externalities. Archibugi and Lundvall (2002) describe that science and technology policy needs to support incremental innovation and the upgrading of competence untraditional industries as well as the formation and growth of high technology industries. However, Stiglitz (2003) highlights importance of competitive selection of research projects and use of peer reviews in order to avoid favouritism and other kinds of inefficiencies and distortions.  Finally, Stiglitz (2003) emphasises advantages of broad-based policies and strategies as compared with narrowly focused strategies striving to ensure that the research strategies are designed by a wide spectrum of special interest groups. Therefore, Stubbs (2007) highlights significant advantages of EU science and technology policy in contrast to national policies of European countries.  Although recently direct state support for science and technology has tended to decline in several advanced countries, importance of science and technology policies, as catalyst for interinstitutional cooperation and guarantee for science-and-technology-friendly environment, remains evident. It is probable that government-supported initiatives will sustain and be followed-up in the future. For instance, collaborative networks of science and technology advance might continue their work without external (governmental) support.