Abstract
This paper is an exploration of the characteristic influence of self-esteem and social relations of 50 adolescents between the age group of 14 to 18 years, having a parent with problem of alcohol dependence. The study was conducted using a descriptive design, Mc Kinnon’s (1981) Self Esteem Index, Pre Adolescent Adjustment Scale (Pareek and Rao, 1970), self structured Sociodemographic data sheet and Focused Group Discussion. The results testify that adolescents with parental alcoholism have poor adjustment capacities with school and teachers but adjust well with their home and environment. This could be because of the strong support system they have in the family, who also share the same environment. The respondents who are from the joint families reported to replicate higher self esteem too. Researcher speaks of possible social work response to the situations of children with the problem of parental alcoholism. Possible social work implications, limitations of the study and directions for further research are presented in the paper.

Alcoholism is a growing problem with society today and many people who suffer from it do not even realise it. Alcoholism also known as alcohol dependence is a chronic, progressive disease that affects millions of Indians. It can cause number of medical problems, violence in person, and even death. An alcoholic is defined as a person who has problems from drinking but continues to drink anyway. Problem of alcohol misuse hit the family like a tidal wave, leaving those involved in a sea of anger, frustration, fear and isolation. This means children who are vulnerable to a host of problems where alcohol diverts the parent’s attention from the child (Sekar et al., 2007).When parental judgement is impaired under the influence of alcohol, children are at risk of suffering both intermittent and chronic neglect. The emotional and psychological abuse caused by inconsistency, rejection and verbal abuse has also been highlighted in various studies (NASW, 2006). Researcher aimed at understanding the impact of parental alcoholism on male adolescents of Mullenkolly Panchayat. Here the parental alcoholism implies to only the father alcoholism, for the mothers are not alcoholics in the particular region. Focus of the researcher in terms of the impact is on the self esteem and the adjustment of these adolescents to different situations like, school, teachers, peers, family, etc.

Definition of adolescents
The word adolescence is a Latin word in its origin, derived from the verb adolescere, which means “to grow into adulthood”. It is a time of moving from the immaturity of childhood into the maturity of adulthood. According to the Eric Erikson’s stages of human development, adolescent is a person between the ages of 13 and 19 (Erikson, 1975). Historically puberty has been heavily associated with teenagers and the onset of adolescent development. There is no single event or boundary line that denotes the end of childhood and beginning of adolescence. Rather, experts think of a passage from childhood into and through adolescence as compared of a set of transitions that unfold gradually and that touch upon many individual’s behaviour development and relationships. These transitions are biological, cognitive, social and emotional in nature. Adolescents with parents, who abuse alcohol and create unhappy events in the family, develop a very tough nature that is not easily accepted in the family and society.

Family and adolescents in the context of alcoholism
In America and Europe, one in five adult lived with an alcoholic while growing up. Even in India the situations are not very much different. In rural India the alcohol consumption by the family heads is much more than that of the abuse in the towns. People who live in cities other than the urban slum dwellers take up drinking as a part of their city culture. Child and adolescent psychiatrists in their studies have stated that these children are at greater risk of having emotional problems than children with non alcoholic parents. In 2006, the National Institute on Alcohol Abuse and Alcoholism (NIAAA) summed up the risks faced by COAs in this way: “being a child of an alcoholic or having several alcoholic family members places a person at greater risk for alcohol problems” (NIAAA, 2006). Alcoholism runs in families, and children of alcoholics (COA) are four times more likely than other children to become alcoholics. It is also noticed that “emotional problems and conduct problems in adolescence” (Sher, 1997) of alcoholic parents, a major result of many studies.  It is important to note that, although there is a genetic component to the vulnerability to alcoholism when it comes to COA, their issues are not primarily related to alcoholism itself but to the social and psychological dysfunction that may result from growing up in an alcoholic home (Gordis, 1990). Most of COA has experienced some form of neglect or abuse. They also face variety of problems such as guilt, anxiety, embarrassment, inability to have a close relationship, confusion, anger, depression, etc.  Professional social worker has many interventional roles in this type of families. It is not just the father or the alcohol addict needs the treatment or intervention, but the whole family has to undergo different types of interventions. As it is discussed, the problem of alcoholism can have negative impact in all areas of the functioning of the family. Children face self esteem and relationship issues, marital discord in the family, children taking into alcoholism, lack of trust (Black, 1985) and confidence, coping issues, etc. All these issues or problems are deal scientifically and skilfully in the social work profession.

Statement of problem
In Indian scenario, the father is the head of the family. If family is not functioning properly under the father’s guidance, it is the duty of the male son to take care of the same. When the father is an alcoholic and does not bother about his own role as the head and leader of the family, the responsibility falls on the son, however small he is. The study on “Impact of Parental Alcoholism on Male Adolescents in Mullankolley Panchayat” was finalised through much readings and discussion with the guide and supervisors. Extensive literatures are available on the similar topic for reading and vast numbers of them conclude that there are enormous problems being faced by the children of alcoholics, especially when it comes to self-esteem, relationship with different sections of the society, taking into drinking, etc. Children loose the trust and reliability on others. They start living to themselves and fail to open up in the group and achieve their fuller potentials.

Research methodology
The study was conducted using a descriptive design, in which the samples were selected using purposive sampling method. A pilot study was conducted including five samples to check the feasibility of the data collection.  Universe of the study consists of all adolescent male in the age group of 14-18, having a parent who is alcohol dependent in the Mullankolley Panchayat. 50 respondents were selected through different steps. Step 1: Focused group discussion of key persons in the each ward of Mullenkolley Panchayat for identifying families having alcoholic parents.  Step 2: Children of Alcoholic Screening Test (CAST) developed by two social workers Jones and Pilat for identifying the 50 samples that fulfils the inclusion criteria of the research (COAF, n.d.).  The tools for data collection were Self Esteem Index by Mc Kinnon (1981). It is a 25 item, 5 point Likert-type scale which read higher the score lower the self esteem and Pre Adolescent Adjustment Scale (Pareek and Rao, 1977). It is a 40 item scale consists of five domains to measure relationship of the respondent with different groups. High positive score indicated better adjustment in that particular area. Researcher also had a self structured Socio-demographic data sheet to collect the basic socio demographic details of the respondents.

Major findings of the study
Study has derived some major findings and some of them are put down below. 84% of the total respondents lived in nuclear families, with their immediate relations. Only 8 respondents from the total sample lived in joint families and seven out of these eight respondents reported to have high self esteem. That could be because of the other familial support that the children received from the members of the family. When the self esteem scale was analysed it was found that 72% of the respondents have higher self esteem. This is against the assumptions of the researcher. Only 28% of the respondents reported to have lower self esteem.  Researcher has concluded out of his study that 70% of the children of alcoholics on whom the study was conducted opined to have better adjustment capacities in the home and environment (see Figure 1). This could be because of the other family members who also share the same environment of living with father alcoholic, understand the child better. 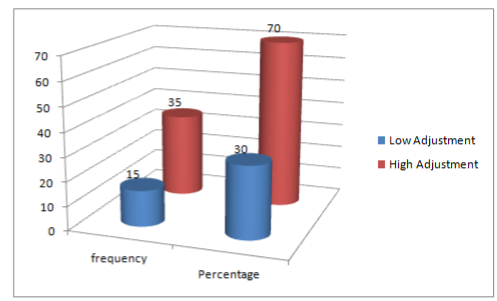 Social work response for the integrated development of adolescents in schools

“Integrated development of adolescents in schools of Mullenkolly Panchayat” is an experimental project being planned to better the conditions of the adolescents of alcoholic parents in the same panchayat. Every individual has the potentials to better the problematic situations that one goes through. It applies even in the case of alcoholic parents. In case of alcoholism, it’s very tough to realize that one is in a troubled situation, thus fails to make efforts to better it. Philosophy of social work profession which says, ‘help people to help themselves’ become very effective and fruitful here. A social worker can play a vital role to intervene with different groups such as adolescents, parents, teachers, community based organizations, etc. Such interventions are very much important to minimize or alleviate the impact of parental alcohol abuse in children, family and community. Number of studies supports the view that there are significant amount of influence due to the alcoholism of father in the family and in the lives of children. This project is an offshoot of the above given study undertaken in the same panchayat. Some of the significant findings of the study had triggered the need of implementing a project of this nature in the panchayat to curb the ill effects of the parental alcoholism in the lives of children and community. This project can in a larger way handle many of the major concerns of the same community. Some of them are:

Conclusions
“Children of alcoholics” is a major subject on which many research studies have come up. A large portion of adolescents of alcoholics have negative adult adjustment, depression and relationship difficulties. The alcoholic family changes in regulatory behaviours such as family rituals, daily routines and short term problem solving strategies may also occurs as the family becomes organised around, or is distorted by the presence of the alcoholic behaviour- there may be periods of de-stabilization and consolidation. The role of social worker in addressing this issue of parental alcoholism has a lot to do with working with the children. Alcohol has become very much part and parcel of the culture that minimum one member of the family drinks in average basis. There can be many measures that could be adopted to tackle the problem of children being victimised by the father, because of the alcohol abuse. Many families suffer because of the mal practice of drinking at home. It has to be tackled for the healthy development of the children of alcoholics. The project “Integrated development of adolescents in schools of Mullankolley Panchayat” is a promising concept for the development of the same panchayat. If this project could meet the primary concern of creating awareness among all sections of the society: children, parents, teachers, ASHA (Accredited Social Health Activists) workers, and the tribal group then the real work get started. Focus on sustainability of the project or simultaneously running the project by the panchayat will be an ideal situation. This then could be adapted to different panchayats, blocks and taluks of the state.